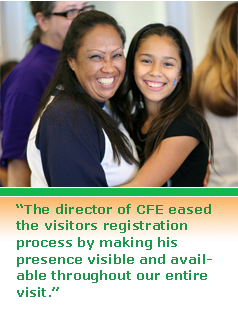 How the Family Express began: A creative solution to a deeply felt need…

The creative idea to fund a transportation program for children and families to visit their loved ones at the two women’s prisons in California was born in Senator Gloria Romero’s office during a meeting between her and Wendy Still, the former director of Female Offender Programs and Services.

During the 1980’s, visiting had been reduced to two days per week at all of California’s prisons. Several of the men’s prisons experienced overcrowding in the visiting rooms on weekends and people who arrived first were having their visits ended early so others could come in.

To respond to that reality, most of the men’s prisons received an extra day of visiting under a newly created “Third Day Visiting” program. The question then arose as to how to respond in a fair manner to the situation of visiting at the women’s prisons. Senator Romero and Wendy Still discussed the fact that the women’s prisons in Chowchilla were too far away for families to visit which explained why the visiting rooms were only about half full on weekends, even though there were approximately 8,000 women there.

The issue for children and families was not that they didn’t want to visit, but that there were too many obstacles to getting there. Many families share that their weekend visits could cost anywhere from $400-700 dollars for gas, lodging, food and so on.

Further, the needs of children to continue to have a relationship with their incarcerated mothers, coupled with the positive impact visiting has in relation to successful reentry led them to think outside the box.

Senator Romero and Ms. Still brainstormed the idea for a transportation program to serve the families from across the state who wanted to see their moms, wives, sisters, and daughters utilizing the same amount of funding that would go toward the cost of staffing and operating a third day of visiting at each facility. It was a moment of clarity where a deep need was met by a simple solution.

Thus, the Family Express was born to directly serve children and families across the state. The first bus trip was on March 25th, 2007, and since then, thousands of people have ridden the bus to be united with their loved ones in prison.